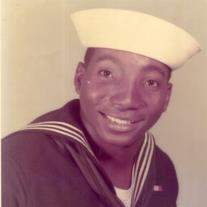 Winfred Ray Randall was born to Jeraldine Veleria Wallace Sims and the late Alton Ray Randall on February 9, 1955 in Longview, Texas. Winfred attended Longview Public Schools and joined Bethel Temple at an early age. Winfred in 1972 join the U.S.Navy where he was an electrical repairman in the U.S. Navy aboard the USS Enterprise in Alameda, California from 1972 - 1978. He while in the Navy received medals for service in the Vietnam War and for honorable National Defense. He was united in marriage to Debra Kay in October of 1973 and to this union three children was born. Winfred on Monday May 25, 2015 he answered the almighty God call to be with him in heaven while, his family was at his side. The fond memories of Winfred will forever be in the hearts of; Tijuana Ann Randall and Orlando Redell Randall (Tameka) of Dallas, Texas and Aisha Desiree Hair (Leroy) of Tulsa, Oklahoma. He was also blessed with Telafarrio Samory Prince, a son, with Alice Prince of Hawkins, Texas; and two daughters Sharika Shantae and Latresa Renee Osborne with Ann Osborne of Marshall, Texas. He leaves, four brothers Orlando Redell Mosley of Longview, Edward Sims, Jr (Marion), Harold Sims (Debra), and Leo Sims of Dallas, Texas and one sister, Linda Williams of Houston, Texas, a special friend Kim Williams of Longview, TX. and a number of grand and great- grandchildren, nieces, nephews and other loving relatives and friends.
To order memorial trees or send flowers to the family in memory of Winfred Ray Randall, please visit our flower store.