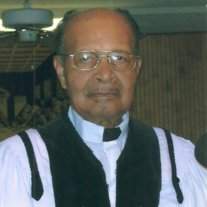 Reverend Victor R.Brown was born February 3, 1931 to George Wesley and Mattie D.Brown in Kildare,Texas He departed this life on December 16, 2013. He grew up in Kildare area and attended church in that area,Rev.Brown attended elementary school in Kildare,Texas.He graduated from Prefection High School and then began college at Wylie Jr. College. He was employed as a cook for the Texas & Pacific Railroad. Later in his life,he answered his call to preach and became a pastor in the C.M.E. church.He pastored churches in Warrensburg,Mo as well as Sedelia,Mo.In 1983,he was sent to serve at Vivian Chapel where he served over 25 years until he retired. Pastor Brown's parents along with seven siblings preceded him in death. He is survived by his faithful and loyal wife Pearlie B.King Brown sons; Roswald (Ivy) and Lawrence Brown;daughter Vickie Crosby;Stepsons;Eugene King III (Lillie)and Fredrick D.King.He also leaves to cherish his memories two sisters;Era V.Sanders and Glendowlyn Mitchell;brother,Henry H.Brown numerous grandchildren,great-grandchildren,as well as a host of other relatives ,family and friends.
To order memorial trees or send flowers to the family in memory of Victor R. Brown, please visit our flower store.