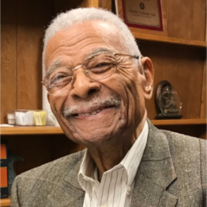 Dr. Robert L. Harper, Sr., age 99, completed his earthly journey on Tuesday, December 17, 2019. He passed very peacefully at home, surrounded by his family. Dr. Harper was preceded in death by his parents, his wife, Eldora Hemphill Harper, and his son, Robert L. Harper, Jr. Visitation will be held at Galilee Baptist Church on Friday, December 27 from 6-pm, and a funeral service will be held at Galilee Baptist Church on Saturday, December 28 at 11am. He will be remembered as a pillar of our community and we were blessed to witness his journey of nearly a century in Longview. Robert L. Harper was born on October 3, 1920 in Longview to Grant and Malinda Wade Harper in the Pleasant Green community. He studied at Jarvis Christian College where he met his wife, Eldora. He served in the U.S. Navy during WWII and was honorably discharged in 1946. He then completed his studies at Wiley College and went on to earn a Doctorate of Dental Surgery at Meharry Medical College in 1952. Dr. Harper practiced dentistry in Longview from 1952 – 2009. He also volunteered as the school dentist at Jarvis Christian College, and served countless Longview-area patients who would have otherwise been unable to receive dental care. Dr. Harper was a 33rd Degree Mason and member of Omega Psi Phi for over 60 years. He served on numerous boards and committees for community advancement. For his lifetime of leadership and service, Dr. Harper received the Unity Award in 2012 from the City of Longview - Partners in Prevention. Dr. Harper is survived by his daughter, Beverly Harper Christopher; sister, Marie Lilly; grandchildren, Jewelette Christopher, Calvin and Kgomotso Christopher, Mark and Wylonda Brackens; 4 great-grandchildren; 1 great-great-granddaughter; loyal nephews; loving nieces; extended family and many close friends. Bigham Mortuary would like to extend our sincerest condolences to the family & Friends of Dr.Robert Lee Harper Sr.& We would like to take this time to thank them for allowing The professionals of Bigham Mortuary to care for them and Dr.Harper.
To order memorial trees or send flowers to the family in memory of Robert Lee Harper, please visit our flower store.