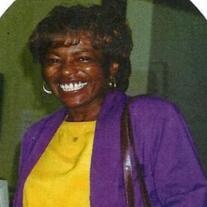 On August 10,1945 Margaret Louise Coby Bush was born to Levy and Genivy Coby.Margaret was the apple of her father's eye and his only baby girl.She was very close to her family and doted on her four brothers.She used to say if she could be half the mother Genivy was to her she would know that she had done a great job.She graduated in 1963 from Mary C. Womack High School.Her happiest memories from high school were playing the French horn in the band and at football games.Margaret received Jesus Christ as her Lord and Savior at a very early age. In 1965"Cookie"as we affectionately called her,asked her parents permission and moved to Los Angeles,California to live with her Aunt Monie Dee.It was there where she met Johnny Mack Bush. To this union a beautiful baby girl was born, LaShone. Margaret loved and doted on her daughter whom she affectionately called Princess.Wanting her daughter to understand the importance of having a relationship with Christ,she along with her daughter joined Harmony Baptist Church.She was a faithful choir member.She was an excellent mother who inspired her daughter to become an awesome woman of God,faithful wife and a loving mother to Margaret's greatest Joy,her grandchildren,Ashlee,Lauren,Joe III,and her great grandson Derrick III.Her grandchildren and great grandson meant the world to her and she had an unbreakable bond with her oldest granddaughter Ashlee whom she lovingly called pumpkin. Those who truly knew Margaret knew that she had a generous heart.She often opened up her home to those who needed temporary shelter and her heart to those who needed love.She never judged anyone and treated every person that crossed her path with love and respect. In the early 70's Margaret began her career at Home Savings of America.It was there that she met so many wonderful lifetime friends. Margaret will truly be missed,but her love will carry on through all the precious souls and hearts she touched and through the legacy she leaves behind,her daughter and grandchildren. She was preceded in death by her father Levy Coby and her mother Genivy Coby.She leaves to cherish her wonderful memories her daughter LaShone Bush Lewis and son in law Joe Lewis Jr. of Richmond,California,Brothers Levy Coby Jr. of Los,Angeles,California,Larry Coby,Melvin Coby and Marvin Coby all of Longview,Texas,Grandchildren Ashlee B.Colbert,Lauryn Lailani Lewis,Joe Lewis III,Mark Edward Petty,Joshua Jones,great grandson Derrick James Hill III,and a host of relatives,friends.
To order memorial trees or send flowers to the family in memory of Margaret Louise-Coby Bush, please visit our flower store.