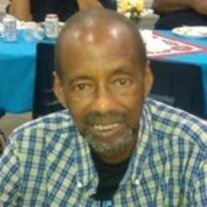 The life of a loyal and devoted man, Levy Coby Jr., came to an end Thursday evening January 2, 2014 over the Albuquerque, New Mexico sky. He was born May 30, 1944 to the parents Levy Sr. and Genevie Coby in Longview, Texas. Levy Jr. accepted Christ at an early age and attended church Bethel AME. He attended schools within Longview ISD, graduating from Mary C. Womack High School in 1962. January 2, 1968 he married Georgia Nell Randall and to that union two beautiful children were born. In 1970, Levy Jr. relocated his family to Bossier City, Louisiana. He became Assistant Manager of El Chico Mexican Restaurant. He was a hard worker and several life-long friendships blossomed. He also became a Mason. He loved cars! He spent a great deal of time working on his Chevy Nova. He always took care of his vehicles. In the mid ‘70’s he moved to Los Angeles, California with his sister, the late Margaret “Cookie” Bush. He was a loyal employee for Q-Tech Corp for over 30 years until his recent health issues became too much for him to continue. Levy Jr. was a friendly easy going man. He loved people. While living in the Los Angeles and Culver City areas he formed many lasting relationships. He loved to entertain people, watch movies, and listen to music. Having to have oxygen 24 hours a day did not stop him. From caring for his family to maintaining a home, he did not know the meaning of the phrase “slow down” or the word “rest”. He was very head strong. Things had to be his way. Him boarding a plane on January 2, 2014 to be with his family for his brother, Larry D. Coby, home going celebration showed his loyalty and dedication which would be the end of his life. He will be missed dearly. Levy Jr. was preceded in death by his parents Levy Coby Sr. and Genevie “Mother” Coby, Sister Margaret “Cookie” Bush, and Brother Larry D. Coby. He leaves to cherish his memories: his son, Levy Coby III; his daughters, Shea Georgette Coby and Toni Goulleaux; his brothers Melvin Coby and Marvin Coby; two grand-daughters Chelsea Turner and D’Nae McCain; A devoted special companion Beverly Thompson; A special friend/sister Joann King; 5 nieces LaShone Bush-Lewis (Joe), Stacy Coby Carter (Marcus), Latoya Coby, Ravon Coby Williams (Coby), and Chatina Deadmon. 2 nephews LaQuinton; and a host of other relatives and friends.
To order memorial trees or send flowers to the family in memory of Levy Coby, please visit our flower store.