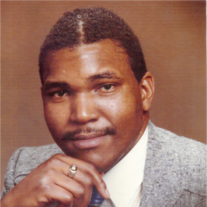 Service for Rev. Gary Keith Jackson will be held on Tuesday September 6, 2016 at 12:noon from the Growing Valley Baptist Church. Under The Caring Hands of The Professionals of Bigham Mortuary. Gary Keith Jackson was born on April 13, 1961 in Longview Texas. Gary, affectionately known as "Big Jack" or "Jack" to many, graduated high school in 1979 from Longview High School and received his craftsman apprentice certification before moving to Portland, OR in 1982. Gary met Sandra Warren not long after moving to Portland and they were married in 1985. Through their union, he became the proud father of his two beautiful daughters, Rosaunda and Celeste. Gary faithfully served as an elder of Portland Miracle Revival Church. He also served as the Men's Advisor and mentor to many of the young men at his church. He built lasting relationships with many pastors and men throughout the city. His passion in life was to see lives changed for the better. Being sight-impaired did not stop him from opening up a sundry business in the heart of downtown Portland; "Jack's Good News Station". His infectious laugh could be heard throughout the main lobby of the Portland building. On any given day you would find customers lined up for a fresh cup of coffee, a newspaper or an encouraging word to help get them through the day and week. He never let his physical challenges of being blind or losing both legs due to diabetes limit him from helping someone in need. Gary is survived by his wife, Sandra Jackson, daughters, Rosaunda Jackson and Celeste Jackson, his mother, Shirley Jackson of Longview, TX, his god-sons, Tecory Elder, JeVaun Pinkney, Todd Rutherford, and Cameron Hamilton, his brother, Eric Jackson of Longview, TX, his sister, Carmen Gayle of Garland, TX and a host of Aunts, Uncles, Nieces, Nephews, Cousins and many, many, many friends.
To order memorial trees or send flowers to the family in memory of Gary Keith "Big Jack" Jackson, please visit our flower store.